Home » TYPES » Succulents » Tulista marginata
Back to Category Overview
Total images in all categories: 11,506
Total number of hits on all images: 6,499,202 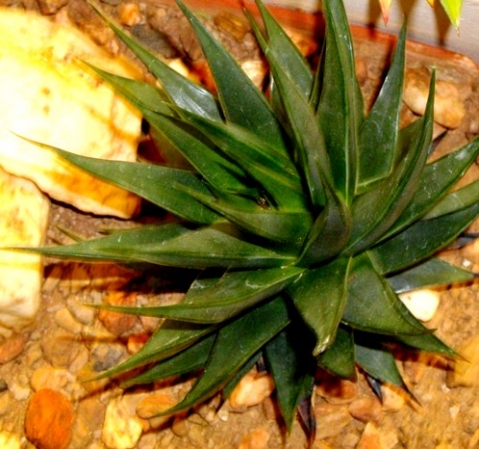 The inflorescence grows about four branches, the panicle reaching 50 cm in height. These branches are subtended by pointed bracts; there are also sterile stem bracts and membranous floral bracts below each pedicel. A raceme or column of stalked flowers becomes about 30 cm long, bearing 25 flowers of which only two will be open simultaneously. The perianths (individual flowers) are pinkish white, about 13 mm long.

The distribution of this Western Cape endemic lies from Worcester and Bredasdorp to Ashton and Riversdale.

The plants grow in fynbos and renosterbos in shale, sandstone or gravel soils. The species is endangered in habitat early in the twenty first century due to several factors, including plant collection, roads, invasion by alien species and agriculture, particularly ostrich farming.

A revision of Haworthia caused the subgenus Robustipedunculares, the four largest Haworthia species, to be moved into the newly created Tulista genus. This happened around 2014 (Scott, 1985; Wikipedia; www.redlist.sanbi.org).