Home » TYPES » Succulents » Tromotriche revoluta
Back to Category Overview
Total images in all categories: 11,921
Total number of hits on all images: 7,168,695 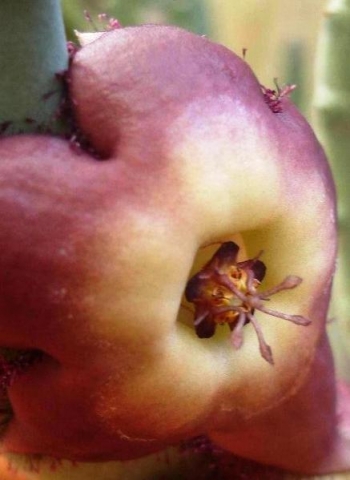 Tromotriche revoluta, previously Stapelia revoluta, is a species of the genus Tromotriche in the Asclepiadaceae family. This family includes plants that produce some very interesting flowers.

The plant spreads widely underground via its rhizomes, so that the grey-green stems above-ground may cover an area up to 1 m in diameter. The acutely four-angled stems have slightly concave sides. They become up to 35 cm long. The small teeth on the angles spread.

The five-pointed corolla is smooth and hairless, its strongly recurved lobes reddish to red-brown. The central disc part of the corolla is whitish cream to greenish yellow. The flower diameter is about 3 cm. The margins are ciliate, the hairs long, club-shaped and vibratile.

The outer corona spreads its five dark lobes low in the flower centre. They are nearly rectangular in shape. The inner corona has narrower, erect lobes, each two-horned and paler with yellowish and pale purple-brown parts. The outer horns are laterally flattened to linear, the taller inner horns are thread-like to club-shaped.

The species occurs in the Northern Cape in the south of Namaqualand to the northwest of the Western Cape, particularly near Clanwilliam and Lutzville.

The habitat is arid, receiving little rain in winter. The plant is not considered to be threatened in its habitat early in the twenty first century (Frandsen, 2017; White and Sloane, 1937; www.asclepiad-exhibition.org; http://redlist.sanbi.org).