Home » TYPES » Succulents » Tromotriche pedunculata subsp. pedunculata
Back to Category Overview
Total images in all categories: 11,921
Total number of hits on all images: 7,168,633 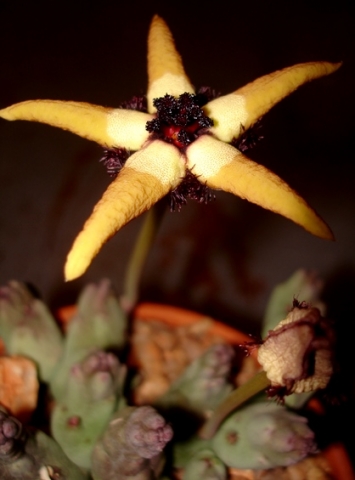 Tromotriche pedunculata subsp. pedunculata is a stem succulent that forms clumps of stems and reaches heights between 5 cm and 13 cm. Its somewhat four-angled stems may be erect or decumbent at the base. The stems are slightly toothed or indistinctly toothed, their surfaces smooth and hairless. Stem colour is grey-green and mottled or tinted purple-brown when growing in sunlight, blue-green when young.

This plant grows naturally in the Northern Cape and the northwestern part of the Western Cape, in Namaqualand and the Richtersveld.

The habitat here is arid, the plants occurring among scrub in rocky places. The subspecies is not considered to be threatened in its habitat early in the twenty first century (White and Sloane, 1937; http://redlist.sanbi.org).