Home » TYPES » Succulents » Tromotriche baylissii
Back to Category Overview
Total images in all categories: 11,539
Total number of hits on all images: 6,621,889 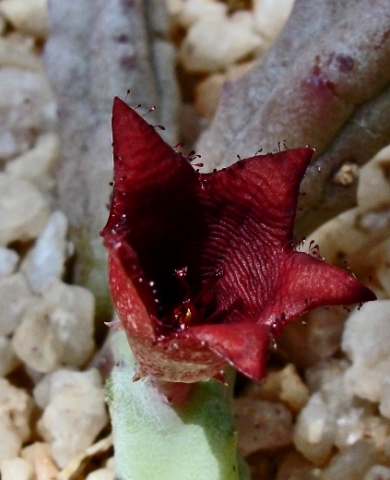 The bell-shaped flowers have long, wide corolla tubes (or cups) ending in short triangular lobes with acutely pointed tips curving outwards slightly and ascending. The fleshy corolla is purplish-red or maroon inside, paler red on the outside. There are small transversal ridges or wrinkling inside the corolla cup, less on the lobes. Dark, club-shaped hairs are sparsely scattered along the corolla margins. Flowering happens in summer and early autumn.

The species distribution is limited to parts of the Little Karoo mountains, e.g. near Prince Albert and in the western part of the Eastern Province, notably near Humansdorp; maybe in the region between.

The plants grow in mountainous terrain among rocks on steep slopes, often hanging from cliffs. The plant is not considered to be threatened in its habitat early in the twenty first century.