Home » TYPES » Succulents » Tridentea pachyrrhiza flower profile
Back to Category Overview
Total images in all categories: 11,538
Total number of hits on all images: 6,621,775 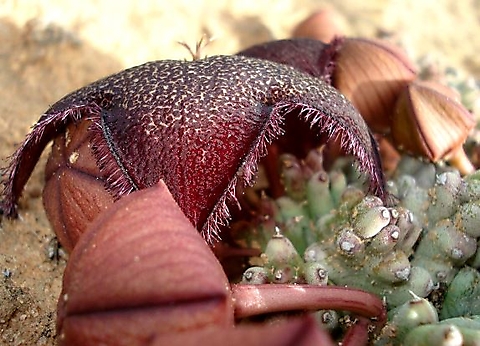 Seen from the side, a Tridentea pachyrrhiza flower shows the curving back of its corolla lobes, well beyond flat or merely spreading. Resembling a five-pointed umbrella, the corolla is more coloured in its pointed parts.

The thickly ciliate lobe margins, like big mammal eyelashes are about straight and white or dull purple. The out-curving inner corona lobes' inner horns on top of the umbrella are the most conspicuous corona parts of this flower. (An inner corona lobe is two-horned, comprising an inner and an outer horn.)

The buds in picture are pointed in their lobe sinuses, the lowest points along the margins where lobes meet. Young buds visible here have concave lobes.

Some stem tubercles in picture are well-rounded, ending in nipple-like, but dry protrusions (White and Sloane, 1937; Frandsen, 2017; Williamson, 2010; iNaturalist).