Home » TYPES » Succulents » Tridentea
Back to Category Overview
Total images in all categories: 11,506
Total number of hits on all images: 6,492,041 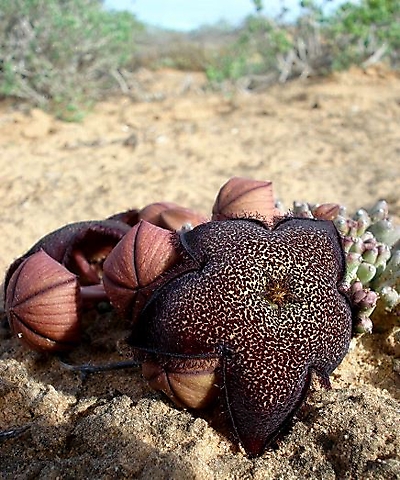 Tridentea is a genus of dwarf stem succulents in the Apocynaceae family, growing clumps or tufts of erect or decumbent stems. There are about 16 species, all indigenous in southern Africa and nine of them occurring in South Africa.

The softly fleshy stems, mainly four-angled, have smooth surfaces, differing from the usually faintly hairy Stapelia stems. The tubercles along the angles bear thick, tapering leaves that spread. The leaves are from 1,5 mm to 10 mm long, leaving white scars when they drop. There are hairy patches like stipules at the leaf bases.

An inflorescence comprises one to five flowers, growing from near the stem base. It has a stout peduncle. The pedicels of individual flowers are up to 8 cm long. Flowers spread or ascend, mostly opening in succession. The calyx is five-lobed, sometimes with marginal cilia (hairs like eye-lashes).

The five-lobed flower corolla is from 2 cm to 10 cm in diameter. The variously coloured flowers are quite flat, compared to the deeper ones of the Tromotriche genus. The corolla is hairless on both surfaces but covered in papillae or ridged inside, the margins ciliate.

The two coronas arising from the column of the stamens are hairless. The outer corona has five ascending to spreading lobes flattened on top and three-toothed. These teeth give the genus its name, Tridentea. The inner corona is also five-lobed, positioned over the anthers and rising over the style. The staminal column arises from near the base of the corolla tube, the anthers on the style head.