Home » TYPES » Succulents » Tridentea pachyrrhiza flower
Back to Category Overview
Total images in all categories: 12,091
Total number of hits on all images: 7,393,239 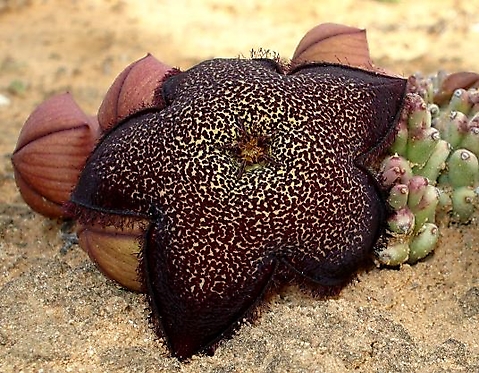 The flowers of Tridentea pachyrrhiza grow in a few-flowered inflorescence on a fleshy peduncle (or stalk). The peduncle emerges from a lower stem part. An individual flower pedicel (or stalk) may be up to 2,5 cm long. There are five small, pointed sepals below the corolla base.

The five-pointed, star-shaped, open flowers have short, triangular to ovate corolla lobes, ending in acutely pointed tips. The centre of the corolla is funnel-shaped, just big enough to house the two small coronas sunken there. The corolla colour is dark maroon, sometimes nearly black with yellow flecks and a red-brown or blackish margin.

In the photo the lobe tips and margins are markedly darker than the corolla centre. Lobe margins are fringed with long, curly, dark red hairs. The corolla reaches 7,5 cm in diameter.

The coronas in the flower centre are inconspicuous in picture. The five outer corona lobes have three teeth each, the middle one bent with a groove at its tip and two broad, lateral toothlets.

The five inner corona lobes are each divided into two horns, the inner one bigger, thin and sickle-shaped, curving out. The outer horn is erect, broader but short, blunt-tipped and notched (White and Sloane, 1937; Frandsen, 2017; Williamson, 2010; iNaturalist).