Home » TYPES » Succulents » Tridentea pachyrrhiza
Back to Category Overview
Total images in all categories: 11,539
Total number of hits on all images: 6,622,017 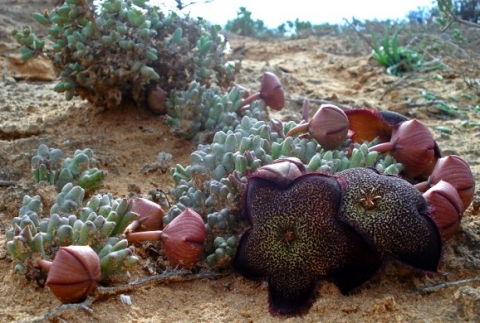 Tridentea pachyrrhiza, previously known as Stapelia pachyrrhiza and commonly called the thick-rooted stapelia, is a clump-forming or mat-forming stem succulent that reaches 6 cm in height, 1,5 cm in thickness. From five to twenty-five four-angled stems may be grown. The variably shaped pale glaucous (blue-green) to grey-green and hairless stems, sometimes spotted red, have few large tubercular teeth.

The species distribution is restricted, found only in the west of the Richtersveld and southern, coastal Namibia.

The habitat is barren desert where extreme temperatures are common. The plants grow in rocky, sandy places where they are often nearly buried in the sand. They have thick, deep roots that anchor them in the loose sand of this windy terrain. Still, this plant is not considered to be threatened in its habitat early in the twenty first century (Williamson, 2010; White and Sloane, 1937; www.redlist.sanbi.org).