Home » TYPES » Succulents » Tridentea gemmiflora
Back to Category Overview
Total images in all categories: 11,506
Total number of hits on all images: 6,491,765 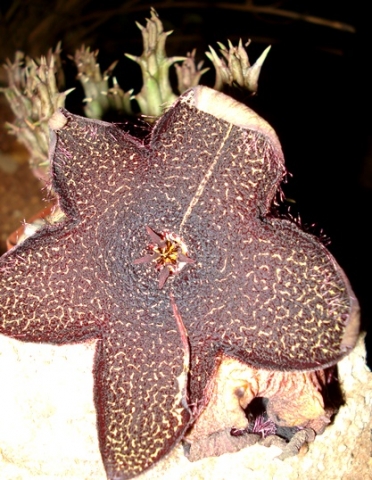 Tridentea gemmiflora, in Afrikaans commonly known as the swartaasblom (black carrion flower) or gortjie (a name that defies translation), is a clump-forming stem succulent reaching heights around 8 cm.

There are long, soft, conical teeth on the ridges of the grey to greenish, four-angled stems, tipped with tiny leaves, only 2 mm long. These little leaves hardly serve a purpose, tending to drop off well before the end of the life of a stem.

The species distribution is in the inland southern and western parts of South Africa, particularly from Worcester and Swellendam to Laingsburg and Graaff-Reinet and northwards into the southern Free State and the Northern Cape. Not endemic to South Africa, the plant is also found in big parts of Africa.

The habitat is semi-arid scrub and grassland, the plants often growing in the shade of bigger plants. Although widespread, it is not common; the species not considered to be threatened in its habitat early in the twenty first century (Vlok and Schutte-Vlok, 2010; JSTOR; Bond and Goldblatt, 1984; www.succulents.co.za; www.redlist.sanbi.org).