Home » TYPES » Succulents » Tridentea gemmiflora flower
Back to Category Overview
Total images in all categories: 11,506
Total number of hits on all images: 6,491,742 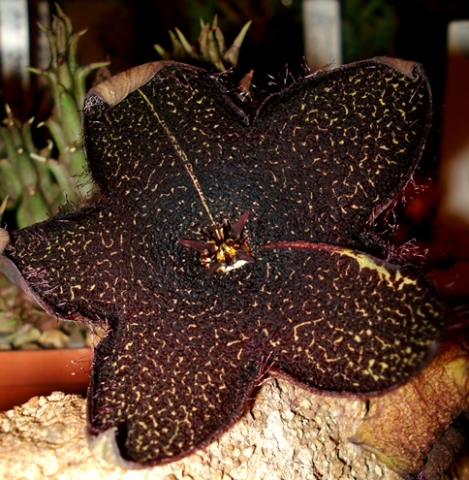 The flowers of Tridentea gemmiflora grow in one inflorescence per stem. One to five flowers emerge from near the base of a young stem, the flowers developing in succession.

The purple-black, flat-faced flowers are sometimes barred and mottled with creamy yellow, sometimes mottled a paler purple. The wrinkled, hairless corolla has a shallow, funnel-shaped depression in its centre around the corona. The ovate, acutely pointed corolla lobes are ciliate, i.e. with eyelash-like hairs upon their margins. These white or purple hairs are slightly club-shaped and vibratile, i.e. capable of waving about, possibly to inspire, entertain or amuse pollinators... movement increases the probability of getting attention, as many insects and some flowers seem to know. The corolla spreads from 5 cm to 7,5 cm in diameter.

The small corona in the corolla centre arises from the staminal column and consists of two parts. Both the outer and inner coronas are five-lobed, the backs of the inner ones over the outer ones and in the front also over the anthers that are in turn incumbent upon the style head. The outer corona lobes of all or most Tridentea flowers have three teeth, giving the genus its name.

The flower of T. gemmiflora has a musky odour. Flowering of this species happens in autumn (Vlok and Schutte-Vlok, 2010; JSTOR; Bond and Goldblatt, 1984; www.succulents.co.za).