Home » TYPES » Succulents » Tavaresia barklyi
Back to Category Overview
Total images in all categories: 11,413
Total number of hits on all images: 6,190,321 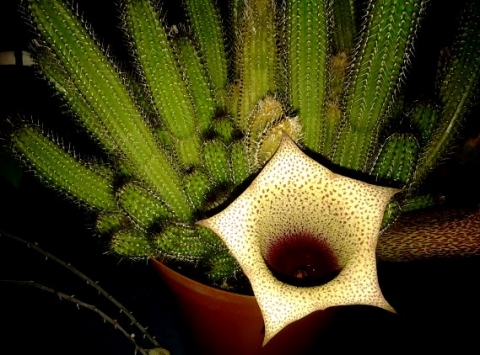 Tavaresia barklyi, commonly known as the devil’s trumpet and in Afrikaans as the bergghaap (mountain ghaap), is a clump-forming stem succulent growing erect stems up to 7 cm long and 1,5 cm in diameter. This is a very variable species.

The cylindrical, bluish green to yellow-green stems are ten- to twelve-angled, closely set with whitish tubercles ending in three sharp, purple or white bristles, the lateral ones diverging. The stems exude a musty flavour when the skin is broken.

The inflorescence comprises one to four flowers on pedicels of 5 mm long, arising from the base of a young stem and opening successively. The flowers face outwards over the ground next to the stems. The acutely pointed sepals are 6 mm long and 2 mm broad at the base.

The corolla is deeply bell-shaped, the wide tube up to 15 cm long and 2 cm wide at the mouth. The five corolla lobes spread and attenuate to acutely pointed tips. Outside the mouth the corolla inner surface is unevenly spotted maroon on a pale yellow to buff background and covered in papillae. The outer surface is maroon striped and glabrous. Inside the mouth or only at the base the corolla is uniformly maroon where the small outer and inner coronas are positioned down in the centre.

Flowering happens from late spring to midautumn after rain. The fruit is a spindle-shaped follicle, the seed has a plumed attachment.

The species distribution in South Africa is from the eastern parts of the Northern Cape to the Free State and Limpopo. It is also found in at least Namibia, Angola and Zimbabwe.

The habitat is rocky slopes and outcrops in Karoo scrub and grassland where the plants grow in the open or sheltered under shrubs. The species is not considered to be threatened in its habitat early in the twenty first century (White and Sloane, 1937; Frandsen, 2017; Hardy and Fabian, 1992; Germishuizen and Fabian, 1982; http://redlist.sanbi.org).