Home » TYPES » Succulents » Stapeliopsis saxatilis
Back to Category Overview
Total images in all categories: 11,894
Total number of hits on all images: 7,134,736 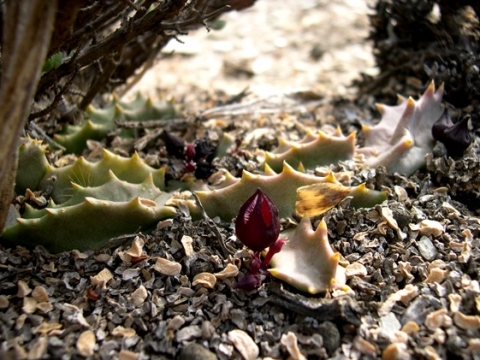 Stapeliopsis saxatilis, commonly known as shy toes and scientifically previously as Pectinaria saxatilis and P. tulipiflora respectively in different eras, is a branching, succulent stem-herb. Its stems are often procumbent or sprawling downwards, heading back into the ground for part of their growth.

The generic name, Stapeliopsis, has been derived from the Stapelia genus name and the Greek word -opsis meaning looks like, referring to the resemblance between the genera. The specific name, saxatilis, is a Latin adjective meaning rock-dwelling, referring to the plant’s proclivity for living among rocks.

The species distribution is in the Western Cape and Eastern Cape in the Great Karoo near Laingsburg and Willowmore, eastwards inland towards Porth Elizabeth and southwards to the Little Karoo near Oudtshoorn and maybe more widely. S. saxatilis is the most widespread of its genus. The photo was taken near Oudtshoorn.

The habitat is stony and arid succulent Karoo, often on quartzite outcrops and on lower slopes where the plants grow under shrubs and succulents. The species is not considered to be threatened in its habitat early in the twenty first century (White and Sloane, 1937; Vlok and Schutte-Vlok, 2015; iNaturalist; http://redlist.sanbi.org).