Home » TYPES » Succulents » Caputia scaposa var. scaposa
Back to Category Overview
Total images in all categories: 11,506
Total number of hits on all images: 6,488,555 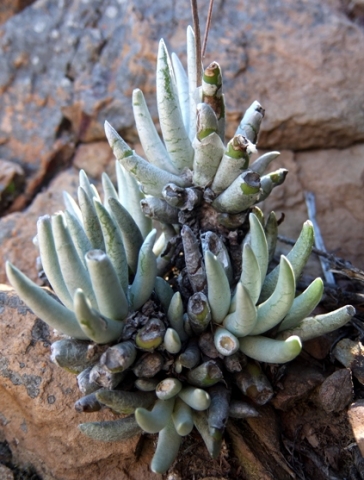 Caputia scaposa var. scaposa, previously Senecio scaposus and in Afrikaans the klein-tontelbos (small tinder bush), is a perennial that grows a clump of numerous leaves, succulent and erect.

Largely a Little Karoo plant, the distribution carries on further eastwards to the Kei River in the Eastern Cape. The habitat is often guarri- and spekboomveld on karoid, rocky outcrops and steep slopes in both clayey and sandy soils; also where nutrient levels are low. The variety is not considered to be threatened in its habitat early in the twenty first century.

There is a rare variety of this plant, S. scaposus var. addoensis that has flat, spoon-shaped leaves with elaborate tips.