Home » TYPES » Succulents » Caputia pyramidata
Back to Category Overview
Total images in all categories: 11,894
Total number of hits on all images: 7,136,466 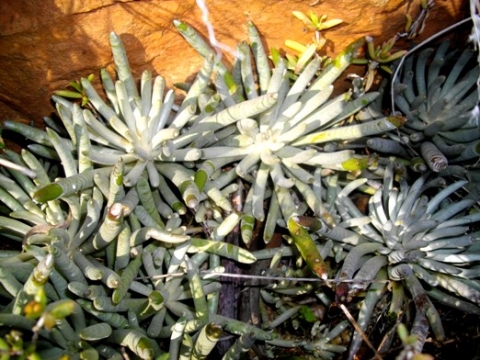 Caputia pyramidata, previously Senecio pyramidatus is a branching succulent shrub that grows to 1 m in height.

The tall, grey and erect flower stalks produce thyrsoid racemes of yellow daisy flowers. The flowerhead is about 3,5 cm in diameter with ray and disc florets all yellow. Flowers have hairy stalks. Blooming occurs from late winter through spring.

This hardy plant grows in the Eastern Cape from Uitenhage to Albany in succulent scrub. The species is not considered to be threatened in its habitat early in the twenty first century (Gledhill, 1981; JSTOR; iSpot; http://redlist.sanbi.org).