Home » GENERA Q-S » Quaqua » Quaqua mammillaris
Back to Category Overview
Total images in all categories: 10,169
Total number of hits on all images: 4,831,451 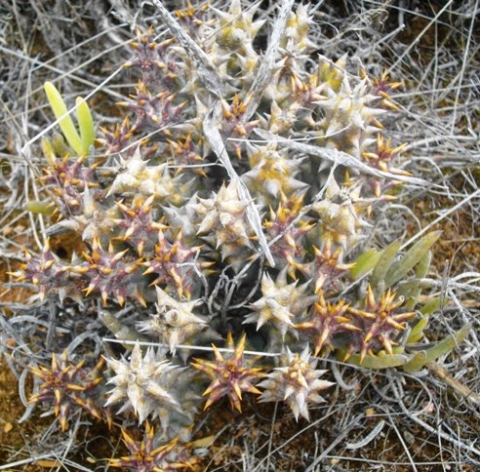 The erect stems branch from a single, centrally rooted base; branching may also occur higher up along the stems. The stems are four- to seven-angled with stout, pointed tubercles or conical teeth spaced upon bulges of the stem ridges. Stems become up to 4 cm in diameter.

The flowers of 2,5 cm in diameter have long, spreading corolla lobes, narrow and dark maroon or purple in colour. There is purple speckling in the creamy white flower centre.

Q. mammillaris occurs from the Little Karoo across Namaqualand into Namibia. The plants grow in the open on stony slopes in arid and semi-arid winter rainfall conditions. The species is not considered to be threatened in its habitat early in the twenty first century (Vlok and Schutte-Vlok, 2010; Le Roux, et al, 2005; http://redlist.sanbi.org).