Home » TYPES » Succulents » Pectinaria articulata
Back to Category Overview
Total images in all categories: 11,921
Total number of hits on all images: 7,169,287 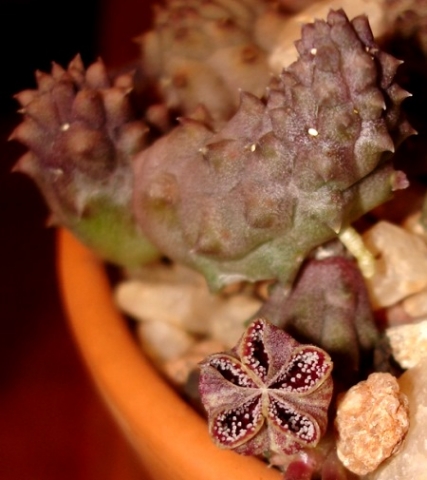 Flowers of plants in the Pectinaria genus are characterised by corolla lobes that are united at their tips, hiding much of the flower interior from sight. Only narrow openings are left between the lobes for tiny insects to access the flower parts involved in pollination. This floral feature of apically fused corolla lobes also occurs at least in Ceropegia species.

There are currently three species of Pectinaria, some with subspecies (more species from finer differentiation were recognised at times in the past). The plants are dwarf stem succulents, leafless, hairless and forming mats from branching of the stems.

Pectinaria articulata, yet another plant of the arid region commonly known as ghaap, was eaten by both the Khoi people and European colonists (who pickled the small stems that only grow from 2 cm to 7 cm in length).

P. articulata is distinguished from the other members of its genus by its six- to eight-angled stems and the minute, fleshy papillae on both the inside and outside surfaces of its flower corollas.

The corolla appears bud-like, about 7 mm in diameter. Greenish grey on its outside and dark red on the inside (as seen through the narrow slits), there are no hairs along the surface or margins of the corolla. The outer corona, not visible here, has the pectinate or comb-like, toothed lobe margins that brings the genus its name. There is a yet smaller inner corona present in the flower centre with tiny blackish lobes. Seeds are borne in erect, cylindrical follicles.

This plant occurs in the west of the Karoo and Namaqualand to the Richtersveld. Two of the four subspecies of P. articulata are rare, the others not threatened in habitat early in the twenty first century (White and Sloane, 1937; iSpot; www.redlist.sanbi.org).