Home » TYPES » Succulents » Notechidnopsis tessellata
Back to Category Overview
Total images in all categories: 11,921
Total number of hits on all images: 7,169,412 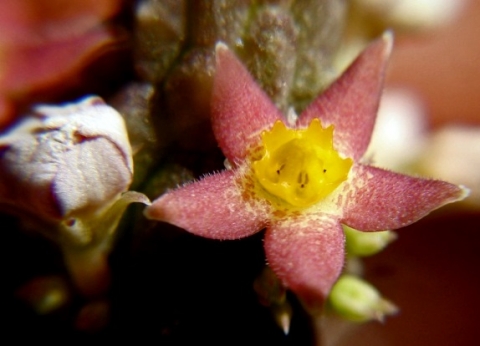 The stems branch sparingly from a decumbent base, becoming up to 1,3 cm thick. The slightly curved and nearly cylindrical stems are longitudinally channelled and obtusely six-angled. Transverse channelling results in rectangular to slightly hexagonal raised stem areas, each with a tiny rudimentary leaf that is papilla-like.

Flowers grow in fascicles of two to five on hairless pedicels of 5 mm from the longitudinal channels near stem tips. There are tiny, hairless, ovate to lanceolate sepals, 2 mm long with acute tips. The flower diameter is about 9 mm.

The outer corona is cup-shaped and yellow, 1 mm high and 2 mm wide. Inside it the inner corona has ascending, linear, yellow lobes on top of the backs of the anthers.

The species distribution is near Vanrhynsdorp, west of the Bokkeveld Mountains and near the Knersvlakte, close to the border between the Western Cape and the Northern Cape. The species is not considered to be threatened in its habitat early in the twenty first century.

Since the move of N. columnaris to Richtersveldia it appears as if the Notechidnopsis genus has become monospecific (White and Sloane, 1937; www.redlist.sanbi.org).