Home » TYPES » Succulents » Kewa salsoloides bud and flower
Back to Category Overview
Total images in all categories: 10,366
Total number of hits on all images: 5,069,393 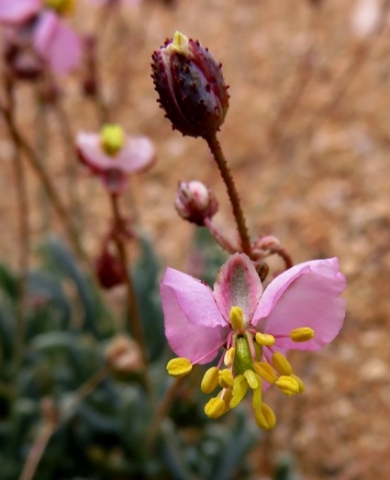 The flower of Kewa salsoloides in picture is pale pink. White flowers are also borne by some of the plants. The thin petals appear of unequal size and some are folded in, maybe by wind. The smaller, darker, elliptic sepals are purplish brown and shiny, covered in sparsely scattered, fleshy protuberances, as is the pedicel.

A pale green, superior ovary, ovoid in shape, is visible among the stamens and below the finger-like stigma branches spreading from its tip. The ample cluster of stamens have filaments pink as the petals and anthers yellower than the stigmas.