Home » TYPES » Succulents » Kewa salsoloides
Back to Category Overview
Total images in all categories: 12,068
Total number of hits on all images: 7,360,747 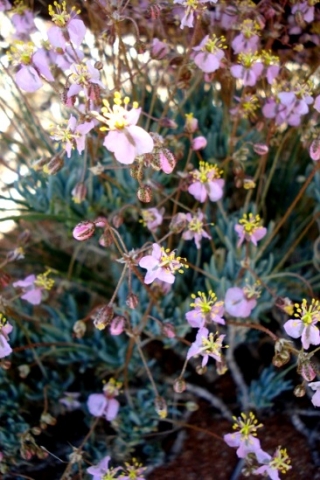 Kewa salsoloides, commonly known as braksuring (brackish sorrel) in Afrikaans and earlier botanically known as Hypertelis salsoloides, is a short-lived succulent shrublet that grows to 30 cm in height. The plant branches, spreading from a single stem.

It has succulent, blue-green leaves. The leaves are erect, cylindrical and smooth or hairless, feeling rubbery to the touch. They become 3,5 cm long.

A second common name for the plant, skaapsuring (sheep sorrel), relates to the fact that the plant is heavily browsed by game and livestock, especially sheep.

The plant is found in the Little Karoo to Namibia, Zimbabwe and in tropical Africa.

It grows in sandy or loamy soils and on granite slopes, often in disturbed sites.  It copes with low rainfall. The species is not considered to be threatened in its habitat early in the twenty first century.

The genus of Kewa, recently moved from the Molluginaceae or carpetweed family to their own family, Kewaceae, has 5 species in South Africa (Vlok and Schutte-Vlok, 2010; www.namibrand.com; http://redlist.sanbi.org).