Home » TYPES » Succulents » Tulista pumila, previously Haworthia
Back to Category Overview
Total images in all categories: 11,506
Total number of hits on all images: 6,494,315 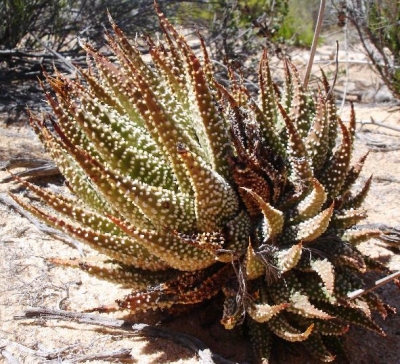 Tulista pumila has a variable name, like so many plants on earth. Paging through the books on the shelf will present several names for this plant, including Haworthia maxima, H. pumila, H. margaritifera and more.

A systematic record of formal name changes functioning across all languages, active and functional in the particular botanical niche of a particular plant is maintained among the botanical scientists. This record reflects the history, the growth in knowledge about the plant and some housekeeping details. A broader, more spontaneous and less coordinated, but vigorously living process generates colloquial plant names. These names reflect experiences, observations and creativity of the general populace related to the same plants.

The naming of plants is as living a process as are the plants themselves. It says something of the plants, as well as of the people's interaction with them. As long as plant and human share space and experience, new names will appear in all languages used around the plants. The good names last longer and convey clearer definition and useful or stimulating meaning. So, there is order and stability in the scientific system as a whole, not in the particular name officially quoted at a given time. Similarly there is meme and meaning, life and culture, passion and story in or behind every parochial  name. Some of it is beyond grasp, but not beyond imagination; some is to be discovered and enjoyed with a little effort.

Back to T. pumila! It surely catches the eye in the veld. The attractive leaf rosettes covered in numerous white tubercles have a unique presence, an elegance in compact form. It is a gem in the mass of veld vegetation. Buy your plant legitimately, don't rob the veld of its gems.

This popular garden subject can be grown from seed or leaf cuttings, more quickly and easily by just separating new rosettes that growing on suckers next to existing garden plants. The plants vary much in size; thriving older plants become large. In exposed positions the leaves become reddish-brown in summer, in shade and sufficiently watered it may remain dark green.

The flowers are small, white and tubular, growing in slender racemes. Blooms appear mainly in spring and repeatedly whenever conditions are favourable; read rain for "conditions". The flowers attract a variety of insects.

The distribution of the species lies from the Worcester area eastwards to about Barrydale in the Little Karoo. The plant grows on slopes in mountainous areas that receive winter rain, often in the shade of renosterveld and other scrub. Those numerous specimens of the past thriving on arable land having long succumbed to agriculture (Scott, 1985).