Home » TYPES » Succulents » Duvalia polita flower
Back to Category Overview
Total images in all categories: 12,068
Total number of hits on all images: 7,360,618 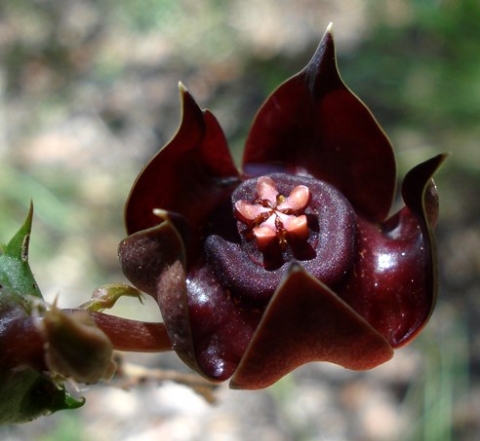 The small flower of Duvalia polita grows solitary or in groups of up to four, each on its fleshy stalk from the node of a rudimentary leaf near a stem base. In a group, flowers open in succession, reaching about 2 cm in diameter.

The corolla spreads around the raised, ring-shaped annulus before its five triangular lobes bend in and point up, ending in narrowly attenuating tips. Corolla colour varies from maroon or purple to yellow with red spots, while the annulus or central disc has a shiny dark red colour. There are sometimes hairs between the corolla lobes, not visible in the photo.

The specific name, polita, refers to the shiny annulus; the Latin word, politus, meaning polished or elegant. The outside surface of the corolla, maroon in the photo as the inside, may also be pale to olive green.

The outer corona in the centre of the annulus is pale pinkish, five-pointed from the flat paddle-shaped lobes curving slightly up. There is an even smaller orange-red inner corona; all of these flower parts surrounding the staminal column, the pollinaria and style head, the business end of the flower. Small, lanceolate, greenish sepals are hidden below the corolla.

Flowering happens from mid-spring to mid-autumn. Pollination is done by flies. The fruits are twin follicles, 20 cm long, appearing long after the flowers (Hardy and Fabian, 1992; Germishuizen and Fabian, 1982; http://llifle.com).