Home » TYPES » Succulents » Duvalia polita
Back to Category Overview
Total images in all categories: 11,769
Total number of hits on all images: 6,918,926 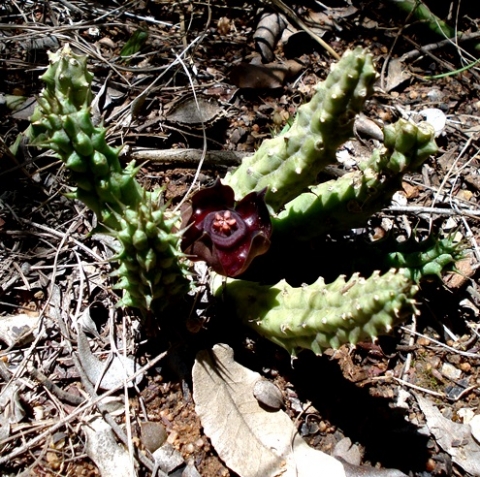 Duvalia polita, sometimes called the polished star, is a dwarf succulent, a perennial that grows tufts of grey-green stems that spread from stolons (above-ground) or rhizomes (below-ground) and reach heights up to 10 cm.

The six-angled stems, erect or decumbent, have vertical or longitudinal ridges with spaced teeth or tubercles that remain when the tiny pointed leaves, present on the tubercles in the greener young stem parts, drop off early. Stems with and without leaves in picture show the difference. Two tiny glands are present at the base of each spiny leaf. An earlier name, D. dentata, was also descriptive.

The species is widely distributed from KwaZulu-Natal to the Northern Cape along all the provinces north of the Vaal River, as well as in neighbouring countries from Swaziland to Namibia and as far north as Malawi.

The habitat is dry savannah regions where the plants form clumps in mopane and thorn tree woodland or scrub. The plants grow in sandy soils at elevations between 1000 m and 1600 m. The species is not considered to be threatened in its habitat early in the twenty first century (Hardy and Fabian, 1992; http://llifle.com; Germishuizen and Fabian, 1982; www.redlist.sanbi.org).