Home » TYPES » Succulents » Duvalia corderoyi
Back to Category Overview
Total images in all categories: 12,068
Total number of hits on all images: 7,360,704 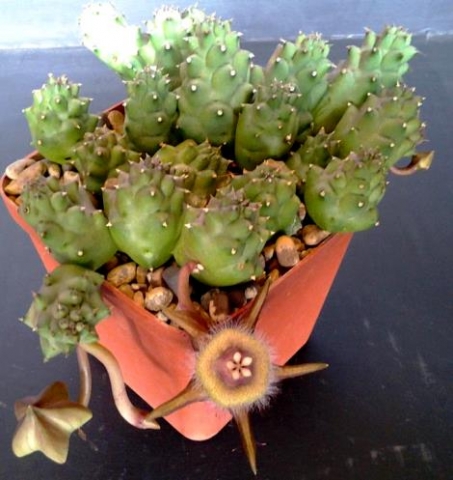 Duvalia corderoyi is a sprawling stem-succulent, a leafless perennial growing short, branched stems about 3 cm long and 2 cm in diameter. The stubby stems are between rounded and six-angled, covered in bulging tubercles with pointy tips. The stems are dull green, purplish from sunlight.

Two to four long-stalked, starfish-like flowers grow from the lower parts of young stems. The small, acutely pointed sepals are hairless. The corolla has a five-pointed star-shape, the narrow, spreading lobes about 1,5 cm long. The lobes are hairless apart from being ciliate along the lower part, the hairs purple and long.

There is a beige ring, a slightly five-angled annulus covered in long, soft hairs around the coronas in the flower centre. The outer corona is dull brick-red and pentagonal, the inner one has five ovoid, beige-coloured lobes.

The fruits are paired, spindle-shaped follicles. The seeds have white-plumed attachments at their tips, useful for wind dispersal.

The species distribution is inland in the Eastern Cape, the Free State, the Northern Cape and the Western Cape, particularly the Great Karoo.

The habitat is arid grassland and Nama Karoo, the plants hiding under shrubs on flats among stones, often dolerite. The species is not considered to be threatened in its habitat early in the twenty first century (White and Sloane, 1937; http://redlist.sanbi.org).