Home » TYPES » Succulents » Duvalia caespitosa
Back to Category Overview
Total images in all categories: 11,921
Total number of hits on all images: 7,168,404 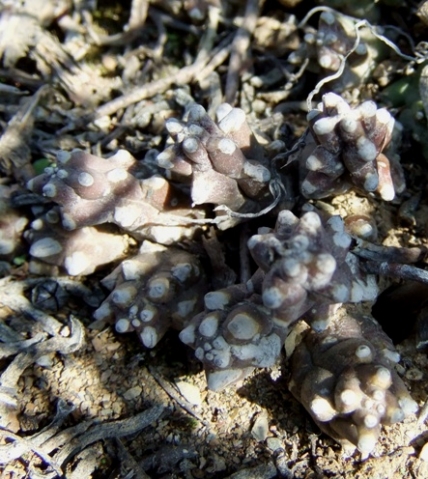 Duvalia caespitosa is a sprawling dwarf stem-succulent occasionally reaching 10 cm in height. The stems branch at the base, forming a compact tuft, erect or outward angled. Cespitose means tufted or many stems growing directly from one rootstock.

The ovoid or oblong stems are four or five-angled, from 1 cm to 2 cm in diameter. The stem surfaces are partitioned into roughly oval sections tipped with tubercles or teeth that have dropped off from the plant in picture, leaving white scars at the top of each bulge.

The species grows widespread from Namibia to the Eastern Cape. The habitat is karoid scrub in clay and loam soils. None of the three subspecies is considered to be threatened in its habitat early in the twenty first century (White and Sloane, 1937; Vlok and Schutte-Vlok, 2010; http://redlist.sanbi.org).