Home » TYPES » Succulents » Codon royenii flower
Back to Category Overview
Total images in all categories: 11,538
Total number of hits on all images: 6,621,864 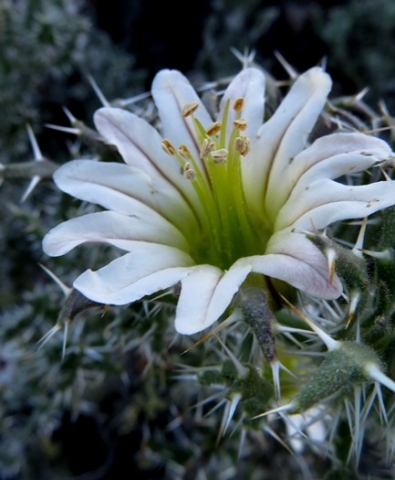 The round-tipped corolla lobes of the Codon royenii flower spread gracefully like an upturned bell, welcoming sun and insects.

There are eleven of these lobes in the flower of the photo, usually from ten to twelve, the same number as the stamens. The lobes are free only in their upper parts where they part, no longer a cylinder.

The radially symmetric (actinomorphic) flower has a deep corolla cup or wide tube, up to about 2,5 cm long; well longer than the lobes. The corolla is cream to nearly white in colour with sunken, dark vein lines running longitudinally from each lobe tip into the cup.

Fleshy, long filaments, gracefully curving outwards near the top, present their chunky, oblong anthers, two-lobed and beige-coloured, taller than the corolla. The greenish yellow filaments are hirsute in their lower parts.

The style is almost as tall as the corolla, split halfway down its length. The stigmas are simple, the style tending to persist. There are two more or less separate chambers in the ovary (Le Roux, et al, 2005; Leistner, (Ed.), 2000; Eliovson, 1990; iNaturalist; Wikipedia; http://pza.sanbi.org).