Home » TYPES » Succulents » Codon royenii bud
Back to Category Overview
Total images in all categories: 11,419
Total number of hits on all images: 6,200,466 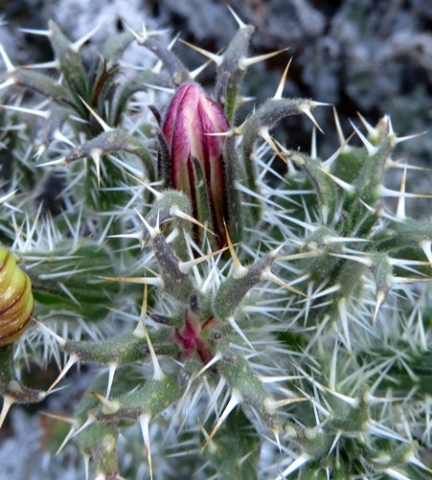 The blunt-tipped bud of a Codon royenii flower is coloured in several shades of pinkish purple and some almost white creamy colouring among its two-tier protection in dark green.

Six tall, ostentatiously out-curving leafy bracts, armed with fierce-looking white spines, form the outer ring of defence. Inside them there are six thin, green sepals, the last line of defence, armed more lightly and less concerned with curving out. The sepals and bracts are free apart from being fused at the base.

The smaller ones, the bracts or inner sepals are boudoir protectors; milder and subtler, attuned to the aesthetics fitting for close association with the elite occupant of an inner sanctum.

The calyx is sometimes described as consisting of twelve free sepals that alternate in size, shape and position around the corolla; certainly not all identical (Le Roux, et al, 2005; Leistner, (Ed.), 2000; Eliovson, 1990; iNaturalist; Wikipedia; http://pza.sanbi.org).