Home » TYPES » Succulents » Codon royenii
Back to Category Overview
Total images in all categories: 11,544
Total number of hits on all images: 6,627,292 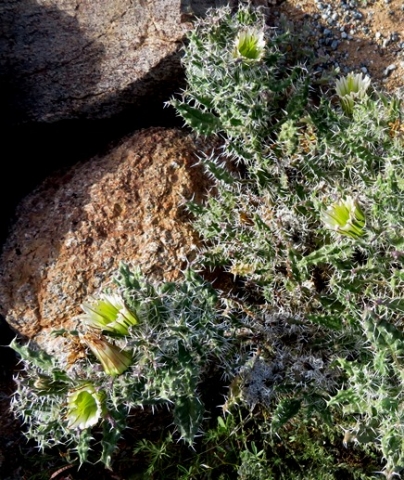 Much of the succulent dark green plant has a covering of straight, white spines. Greenish cream corollas are scattered solitary among masses of spiny foliage.

Pick a flower and tip the cup to taste the sweet nectar, worth the risk of suffering one or several spine pricks. Don't swallow a bee!

The species is distributed in the Northern and Western Cape as well as in Namibia.

The plants grow in semi-desert and desert territory in low (winter) rainfall parts of succulent Karoo and adjacent extensions into summer or all-season rainfall parts. The plants grow on sandy flats, dry and sandy watercourses, rocky slopes, pockets of gravel between boulders, disturbed places and along roadsides. The species is not considered to be threatened in its habitat early in the twenty first century (Le Roux, et al, 2005; Leistner, (Ed.), 2000; Eliovson, 1990; iNaturalist; Wikipedia; http://pza.sanbi.org; http://redlist.sanbi.org).