Home » TYPES » Succulents » Australluma ubomboensis flower
Back to Category Overview
Total images in all categories: 11,921
Total number of hits on all images: 7,169,138 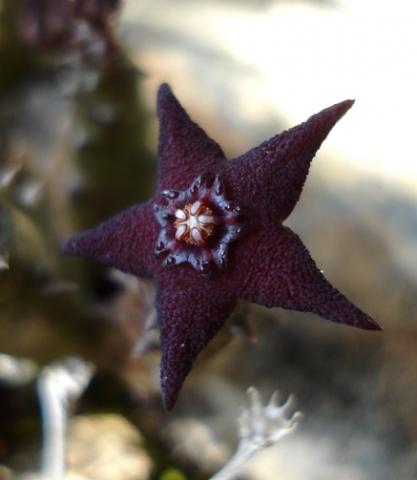 The small, uniformly coloured, dark flowers of Australluma ubomboensis are borne near the tops of its stems. They grow in groups of two or three, each on a stalk of about 5 mm. Although the flowers superficially resemble several other Apocynaceae species, the corona is different.

The five-pointed star-shape of the corolla reaches 9 mm in diameter, the lobe tips bent back slightly in the convex surface. It is dark purple or maroon in colour, hairless and wrinkled or corrugated in texture.

The outer corona is also purple, but smooth and shiny, its five horizontally spreading lobes deeply notched like some elaborate crest or badge upon the corolla. In its centre the small inner corona, again five-lobed, has its pale cream, oblong lobes upon the anthers and joined at the base of the outer corona.