Home » TYPES » Succulents » Australluma ubomboensis
Back to Category Overview
Total images in all categories: 11,506
Total number of hits on all images: 6,503,313 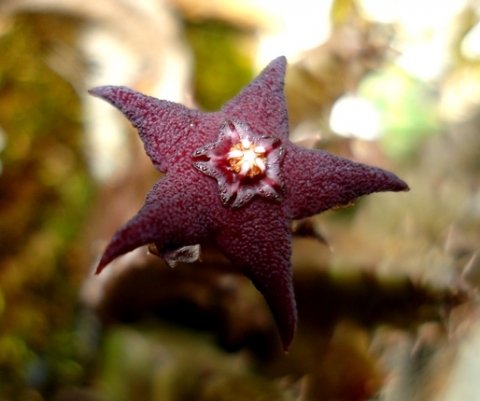 Australluma ubomboensis, commonly still probably best known as the Ubombo caralluma but also as the Ubombo thick-boat, is a dwarf succulent of the Apocynaceae family that grows small tufts of erect, fleshy stems to 6 cm in height. The stems are four-angled, the conical teeth on the angles tipped with erect, rudimentary leaves. The star-shaped flowers are maroon to purple and small.

The complex characteristics featuring in the identity of this plant have landed it in a series of genera over the years. Some of these short botanical category sojourns happened not too long ago: At various times it was known as Orbea ubomboensis, Caralluma ubomboensis, Angolluma ubomboensis, Huernia ubomboensis and Pachycymbium ubomboense respectively. So, it remains to be seen whether stability has yet arrived in the naming saga of the species. For now the plant resides in its own genus, a monotypic one.

At least its link to the South African (L)Ubombo or Lebombo Mountains has brought it some nomenclatural constancy. That does not tell the full story of its origin or home. In South Africa A. ubomboensis grows in the north of KwaZulu-Natal, the east of Mpumalanga and the north-east of Limpopo, near Pafuri. The distribution also straddles the South African borders with Mozambique, Zimbabwe and Swaziland.

The habitat of the species is hot and dry slopes in granite or sandstone soils at elevations from 300 m to 1450 m. It is interesting that under three of the above botanical names the vulnerability of this plant had been assessed between 1980 and 2009 as rare, vulnerable and of least concern respectively; the most favourable outcome also fortunately being the latest one (White and Sloane, 1937; Pooley, 1998; Hardy and Fabian, 1992; www.redlist.sanbi.org).