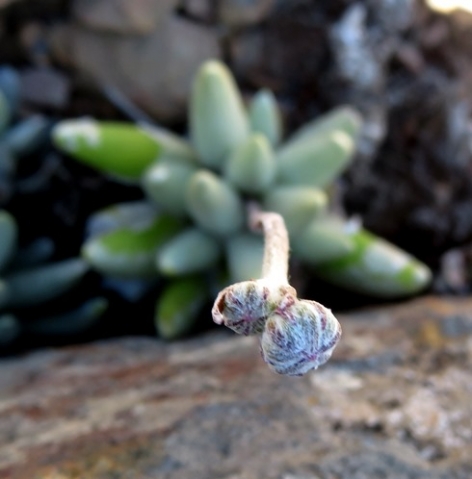 Too early to see open yellow flowerheads on Caputia scaposa var. scaposa in January near Oudtshoorn for this photo, although summer is the expected bloomtime for the plant in the Little Karoo.

Or maybe the season has been too harsh, causing these flowerheads to abort? Unlikely, for the first hairy bract is just starting to lift from the capitulum, the flowerhead, to reveal yellow. And the leaves below have plenty of juice to support the event.

These are not old flowerheads after blooming: By then, the bracts would only surround the browned disc florets in a ring, open and brush-like at the top.

The blades of the yellow rays would also have dropped off upon withering. Ray florets fruit as Caputia rays are female. The genus was formerly part of Senecio (Vlok and Schutte-Vlok, 2015; Leistner, (Ed.), 2000; http://pza.sanbi.org).