Home » TYPES » Succulents » Augea capensis flowering stages
Back to Category Overview
Total images in all categories: 11,442
Total number of hits on all images: 6,209,929 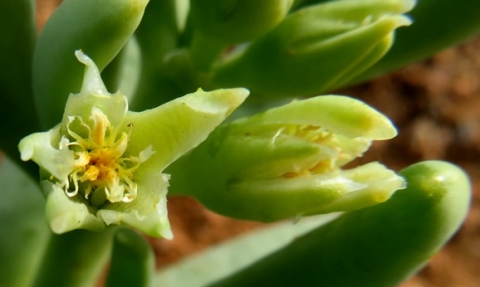 Unequal Augea capensis sepal length is evident in the various stages of flower openings under way here. Pointed and thickly fleshy, even sporting a rare tooth, the sepals earlier fitted neatly around corolla and its contents. Now, no longer concerned with the appearance of margins that are no longer functional, like a to be discarded hamburger wrap.

The five greenish white petals are linear and three-lobed, the central lobe shortest. There are ten stamens in each flower. They emerge from the margins of a cup-shaped disc below, alternating with ten processes or outgrowths also present there... this flower cup a densely populated space! What’s more, the ten filaments each has a two-part appendage. The yellow, oblong anthers have obtusely pointed tips.

The ovary is stalkless inside the disc, comprising ten locules that may grow two or three seeds each. The style is short, its stigma about flat on top. The egg-shaped seed is woolly (Vlok and Schutte-Vlok, 2010; Le Roux, et al, 2005; Leistner, (Ed.), 2000; iNaturalist).