Home » TYPES » Succulents » Astroloba smutsiana grown large
Back to Category Overview
Total images in all categories: 11,921
Total number of hits on all images: 7,169,900 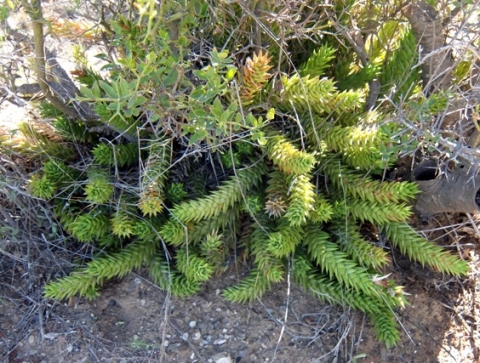 This thriving Astroloba smutsiana plant, venturing into the open in its maturity, still shows one of its secrets of a successful life: Start off in these surroundings under the protection of a tall woody shrub to avoid early mishaps from being too exposed.

The curving stems, basally branched or already having done so below ground level via stolons, meander as they may to see some sun for better photosynthesis. Retaining their older leaves well down along the longish stems contributes to achieving this aim.

Some reddish colouring has appeared upon the leaves in picture, but very little for this time of year before the rainy season. The leaves turned brown or red do less or maybe no photosynthesis, the plant in rest living frugally on less sustenance.

This unusually well endowed plant was photographed during April in the Little Karoo southwest of Oudtshoorn. The species distribution is small, confined to the western parts of the Little Karoo (Vlok and Schutte-Vlok, 2010; iSpot).