Home » TYPES » Succulents » Astroloba foliolosa budding
Back to Category Overview
Total images in all categories: 11,544
Total number of hits on all images: 6,627,331 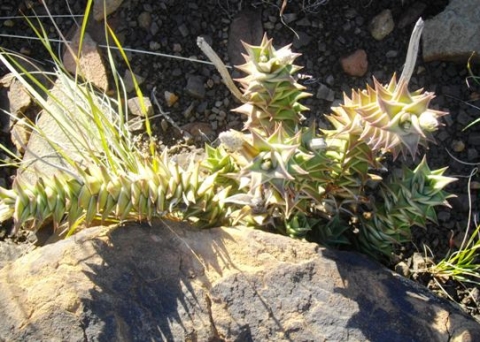 As all eight the Astroloba species, A. foliolosa has radially symmetrical flowers, distinguishing them from Haworthia flowers that are bilaterally symmetrical. Thick clusters of buds are just appearing on the flower stems that are emerging from among the leaves on this plant.

The species distribution is in the central Karoo, inland in semi-arid parts of the Eastern, Northern and Western Cape. The plant was photographed near Beaufort West in May.

Astrolobas are usually found growing under taller, spreading shrubs, nurse plants that afford them shade and shelter in the karoid conditions. The species is not considered to be threatened in its habitat early in the twenty first century (Wikipedia; iSpot; www.redlist.sanbi.org).