Home » TYPES » Succulents » Gonialoe variegata near Oudtshoorn
Back to Category Overview
Total images in all categories: 11,769
Total number of hits on all images: 6,918,745 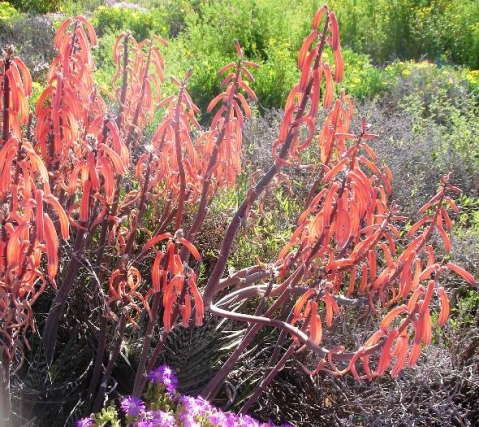 Gonialoe variegata, previously Aloe variegata, has some notable common names. Partridge breast aloe refers to the eye-catching white spots scattered in transverse bands across the leaf surfaces, as well as to the earlier generic name of Aloe. The Afrikaans name of kanniedood (cannot die) recognises the endurance of the plant in harsh conditions, particularly drought and temperature extremes.

In much of the arid inland central region of South Africa and in southern Namibia one may find G. variegata on hard ground among rocks, under scrub or in full sunlight. Flowering happens in habitat from midwinter to early spring.

The plant propagates vegetatively from shoots at base level, the stolons. Be careful to provide access to sunlight, good drainage and only a little water, otherwise your kanniedood will find a way of failing its name.

If it flowers in your garden during a second season or more, consider yourself an accomplished gardener (Reynolds, 1974; Wikipedia; Jeppe, 1969).