Home » TYPES » Succulents » Gonialoe variegata
Back to Category Overview
Total images in all categories: 11,523
Total number of hits on all images: 6,599,425 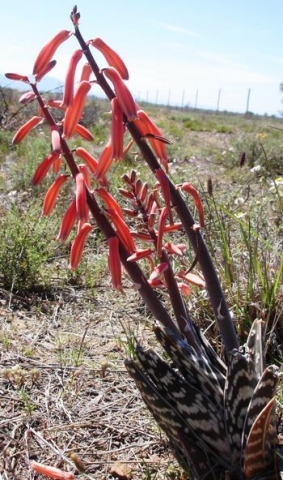 The leaves of Gonialoe variegata that used to be Aloe variegata are arranged in triangular rosettes, growing in three vertical ranks. There are from 6 to 8 leaves per rank on a mature plant, sometimes with a spiral twist to the ranks.

In shade and sufficiently watered, the plants are green. In dry conditions and full sun the leaves will be dark brown. Whatever the conditions, the leaves are always covered in the characteristic small round or oblong white spots occurring in irregular bands across the leaf width. The leaf margins as well as the leaf keels are strengthened by hard ridges like white cartilage minutely toothed.

The inflorescence of G. variegata is either simple or has up to three cylindrical racemes. Up to six separate inflorescences may be produced from one rosette per flowering season. The racemes are lax with 20 to 30 flowers each. The height of the panicle is seldom beyond 30 cm.

The perianths are dull red to pinkish, the upper parts darker. The filaments are pinkish, the anthers not exserted or only slightly so. The peduncle or main stalk of the racemes in picture are notably large.

The habitat is arid and semi-arid scrub veld and succulent Karoo at elevations from 100 m to 1800 m. The species is not considered to be threatened in its habitat early in the twenty first century (Van Wyk and Smith, 2003; Reynolds, 1974; Jeppe, 1969; http://redlist.sanbi.org).

See also the Plant Record on G. variegata with more photos elsewhere on this Site.