Home » TYPES » Succulents » Kumara haemanthifolia curiously named
Back to Category Overview
Total images in all categories: 10,366
Total number of hits on all images: 5,069,135 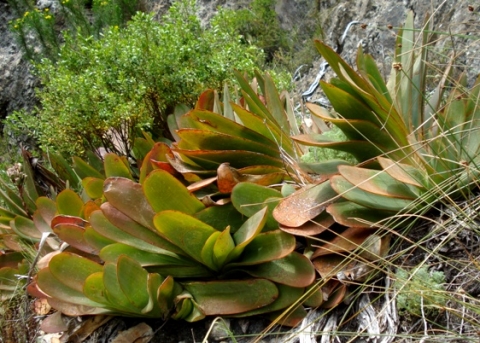 Kumara haemanthifolia , until recently called Aloe haemanthifolia, is named for Haemanthus, a genus of mainly red-flowering bulbous plants, unrelated to Kumara or Aloe. Its name bears no reference to the orange-red or scarlet flowers of K. haemanthifolia, but recognizes the leaf resemblance between Haemanthus and Kumara. Haema is blood in Greek, anthos flower and folia means leaves in Latin; the link to blood is focused on the red flowers of Haemanthus.

Two analogies are thus used in the specific name of K. haemanthifolia: leaf shape being one (directly), flower colour the other (indirectly). So this Aloe ends up with a bloody flower-leaf concoction for a name in the people world; no repercussions, however, in the plant world.

And after all that the resemblance to Haemanthus is sometimes described as superficial. An emerging common name of blood aloe for K. haemanthifolia may perpetuate the curious situation, although the plant has now left the Aloe genus.

Language, another vigorous living entity of our world, generates complexities analogous to what happens in botany; sometimes even containing traces of logic (Van Wyk and Smith, 2003; Reynolds, 1974; iSpot; Andrew, 2012).