Home » TYPES » Succulents » Kumara haemanthifolia leaf bases
Back to Category Overview
Total images in all categories: 11,538
Total number of hits on all images: 6,618,451 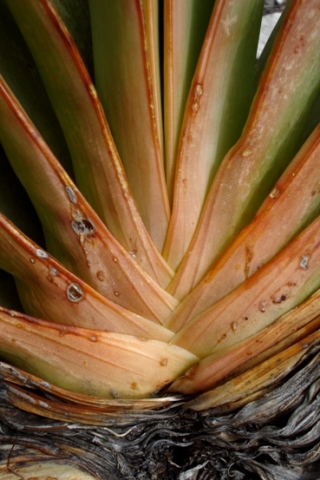 The base of an Kumara haemanthifolia fan of leaves shows the regular overlap among the alternating leaves. They curve in at the margins and cohere strongly below in sheath-like manner. Some straight ridges on the outer leaf surfaces join the margins slightly higher up. Pale, pinkish brown colouring replaces green on the margins near the base of especially the lower leaves.

Below the oldest leaf that still contains sap, the desiccated remains of earlier leaves tell something about the plant’s age; of growth in times before the current leaves had even appeared.