Home » TYPES » Succulents » Aristaloe aristata bearing fruit
Back to Category Overview
Total images in all categories: 11,037
Total number of hits on all images: 5,689,520 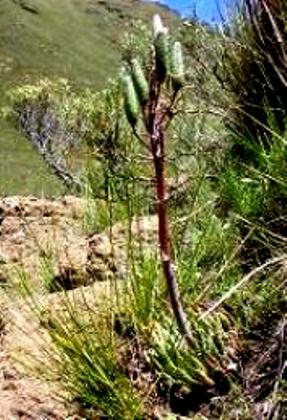 Green, unripe fruit capsules of this Aristaloe aristata plant in grassland habitat have formed successfully on its erect stalk. Some flowers of members of the Asphodelaceae family drop off without producing seed, while seed viability also varies. Note the size of the annual stalk and seed containers above, compared to the perennial leaf rosette that generates it.

The three-sectioned fruit capsules resemble those found on lilies and aloes; their flowers structurally similar. The three-chambered seed-vessel or capsule contains two upright columns of seeds in each chamber. The capsule is a development from the original carpel or female flower part.

Before the Aloe genus was moved into the Asphodelaceae family, it formed part of the Liliaceae. Now Aristaloe is moved out of Aloe. The photo shows the narrow, oblong capsules on their erect pedicels. When they dry out and open at the top, seeds will be spilt gradually, dispersed in accordance with the whims of the wind (Reynolds, 1974; Jeppe, 1969).