Home » TYPES » Succulents » Aristaloe aristata
Back to Category Overview
Total images in all categories: 11,921
Total number of hits on all images: 7,169,838 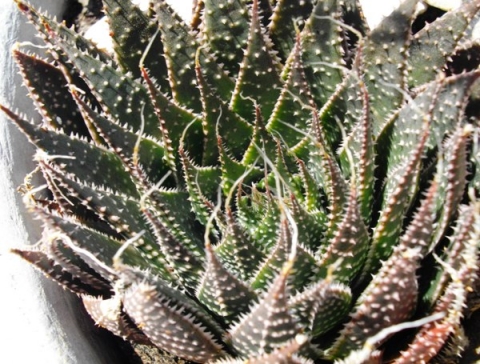 Aristaloe aristata, known colloquially as the guinea-fowl aloe or the lace aloe and previously botanically as Aloe aristata, is a dwarf aloe. Since being moved from Aloe, it resides in the monotypic genus, Aristaloe, meaning that it contains only one species.

A. aristata forms clumps of more than ten rosettes in favourable circumstances, although it remains “stemless” insofar as the rosettes remain on the ground and any short stems as there may be, invisible. All leaf surfaces are dark green with scattered white spots sometimes developed into small white mounds or tubercles.

The leaf margins have rows of little soft white teeth. Some leaves are keeled. The specific name, aristata, is derived from the eponymous Latin word meaning bristly or awned, referring to the lacy leaf margins.

A. aristata occurs naturally in a large inland distribution. This area comprises central South Africa from the Karoo, Eastern Cape, the entire Lesotho and adjacent areas of the Free State and KwaZulu-Natal.

The habitat is ecologically diverse, including parts at elevations ranging from 200 m to 2200 m. The plants grow in semi-arid, karoid terrain in sandy soil to open rocky places and shaded riverine forests. The species is not considered to be threatened in its habitat early in the twenty first century.

This plant is a favourite with gardeners in diverse circumstances as it is hardy, small and easy to grow, also performing well in containers and indoor conditions. So, this one is not only for horticultural experts or people with much garden space. Some sun will help to induce blooming (Van Wyk and Smith, 2003; Jeppe, 1969; http://redlist.sanbi.org).