Home » TYPES » Succulents » Aristaloe aristata inflorescence
Back to Category Overview
Total images in all categories: 11,528
Total number of hits on all images: 6,610,517 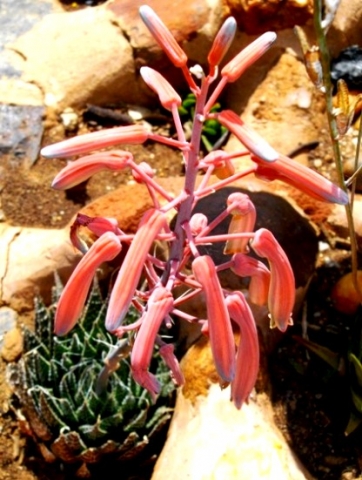 The inflorescence of Aristaloe aristata shown here is simple, consisting of one raceme only. Branched panicles are common with two to six racemes.

The individual flower, the narrow perianth tube, has a basal swelling over the ovary and a constriction just beyond it. The open flower tubes are slightly curved downward in this species. The upper side of the perianth receiving full sunlight may be a brighter red, compared to a pale hue below, where it is partly shielded from the sun; a reported phenomenon not always seen.

The outer three corolla segments or tepals are free in their upper parts, the inner ones almost entirely attached to each other. Both the anthers and the stigma are normally said to be exserted, although that is not the case in picture.

A. aristata presents a fair amount of variation across its large natural distribution. Until recently the plant was known as Aloe aristata, now moved to its own, monotypic genus. A general comment about aloes made by Reynolds applies to many other living species: “There is almost as much individuality and variation among some species of Aloe as there is among human beings” (p.7).

When not in flower, A. aristata, like A. humilis, may be confused with some Haworthia species; similar to people being mistaken for look-alikes or doubles. Latitude and innovation in the genes keep the plant people busy, also those working in all the other parts of biology (Reynolds, 1974; Van Wyk and Smith, 2003).