Home » TYPES » Succulents » Adenium swazicum
Back to Category Overview
Total images in all categories: 11,029
Total number of hits on all images: 5,676,601 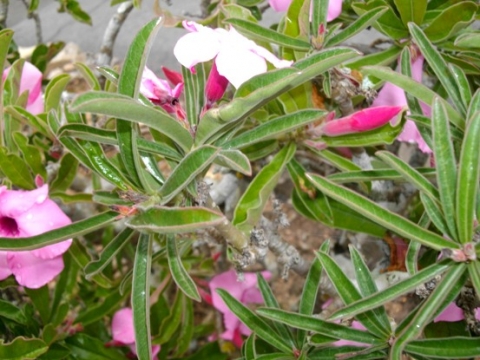 Adenium swazicum, the summer impala lily, is a smaller plant than A. multiflorum, the well-known impala lily. A. swazicum usually grows to about 30 cm in height with branched, grey or greenish stems that are swollen with succulence. Underground there is more succulence in the plant's large caudex.

The leaf shape of the summer impala lily is narrowly oblong to obovate, tapering at both tip and base. The leaves curve up or fold in along the midrib and often downwards at the ends lengthways. The pale leaf margins are entire, finely hairy and sometimes tinged with red. Leaf colour is dark to pale green, usually still paler on the lower surface.

The plant is found in sandy soil of the Mpumalanga Lowveld, northern KwaZulu-Natal and also in Swaziland, for which the species is named.

This species is suffering from habitat degradation caused by various human activities. Being hardy and poisonous don't help any longer, the plant is considered to be critically endangered in its habitat early in the twenty first century. Plant collection for the traditional medicine and horticulture trades, as well as sugar cane farming are among the contributing factors (Smith and Crouch, 2009; Onderstall, 1984; http://redlist.sanbi.org).