Home » TYPES » Shrubs » Spatalla parilis
Back to Category Overview
Total images in all categories: 12,061
Total number of hits on all images: 7,359,923 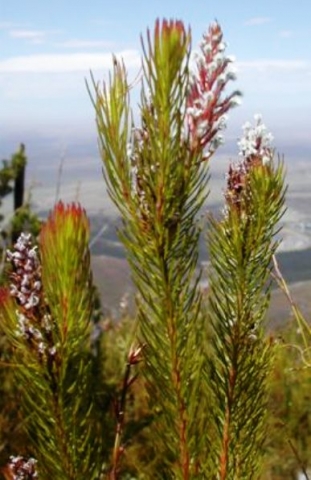 Spatalla parilis, commonly known as spike spoon, is a much-branched shrub that reaches 1,5 m in height. It has needle-like leaves that overlap, ascending around the stems. Leaves become up to 2 cm long. The young leaves in picture are red-tipped. Some red is also seen on the stems.

Single-flowered headlets of silvery pink florets, curved while in bud, are born in stem-tip racemes of up to 6 cm. The flower style is about 6 mm long, the spent perianth very hairy. Flowering happens all year round.

This fynbos plant grows on moist, upper sandstone slopes of the Western Cape from Hottentots-Holland to Riversdale. The species is not considered to be threatened in its habitat early in the twenty first century. The upper mountain parts in the region are mainly left alone, apart from fire (Manning, 2007; Bond and Goldblatt, 1984; iSpot; www.redlist.sanbi.org).