Home » TYPES » Shrubs » Spatalla curvifolia
Back to Category Overview
Total images in all categories: 12,091
Total number of hits on all images: 7,393,254 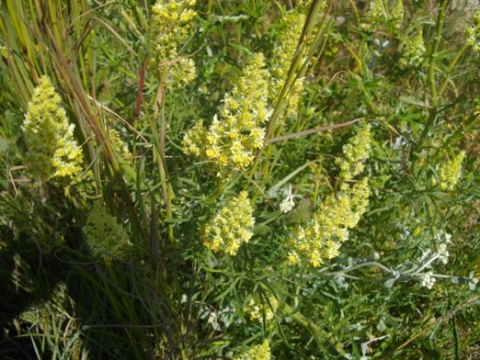 Spatalla curvifolia, commonly known as the white-stalked spoon, is a rounded shrublet of the Proteaceae family that grows to 80 cm.

The leaves become up to 5 cm long, while the lower branches become leafless. The leaves are narrow and needle-like, channelled along the length on the upper surface and usually slightly in-curving towards the stems. The curving leaf feature is captured in the specific name of curvifolia.

The plants grow from the Kogelberg to Riviersonderend and Bredasdorp to Agulhas.

The habitat is lower sandstone slopes in sandy, acid soil. The species is considered to be nearly threatened in its habitat early in the twenty first century due to flower harvesting, urban development, alien plant invasion and agriculture.