Home » TYPES » Shrubs » Sparrmannia ricinocarpa flowers
Back to Category Overview
Total images in all categories: 12,091
Total number of hits on all images: 7,393,222 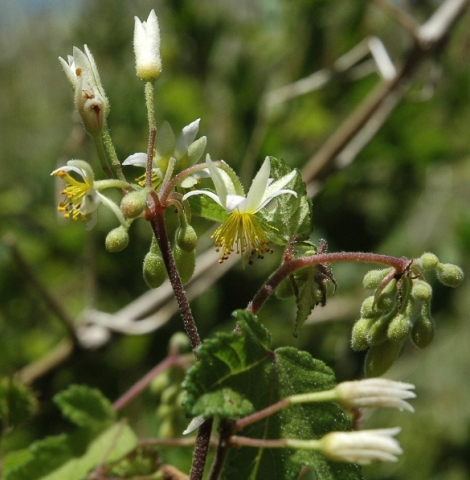 Sparrmannia ricinocarpa, the mountain stock-rose, is a slender shrub of forest margins. It sometimes scrambles to 3 m into the surrounding growth. It may become woody with age. There are only two Sparrmannia species in southern Africa, this one and S. africana; another five occur in Africa and Madagascar.

The leaves of S. ricinocarpa have long stalks. They are both toothed and angularly lobed, finely hairy and prominently veined. The flowers have green sepals and narrow white or pink petals that curve far back when they open, lending prominence to the mass of yellow stamens; the outer ones being sterile. The fruits are ovoid and covered in bristles that attach to clothing and animal pelts.

The species distribution is in the north of South Africa, from the Eastern Cape to Limpopo, as well as in Swaziland and Zimbabwe. The plant tends to spread on disturbed land. The species is not considered to be threatened in its habitat early in the twenty first century.

The plant is sometimes harvested from the wild for use as a source of fibre (www.zimbabweflora.co.zw; www.sntc.org.sz; www.redlist.sanbi.org).