Home » TYPES » Shrubs » Sonderothamnus petraeus
Back to Category Overview
Total images in all categories: 12,082
Total number of hits on all images: 7,379,695 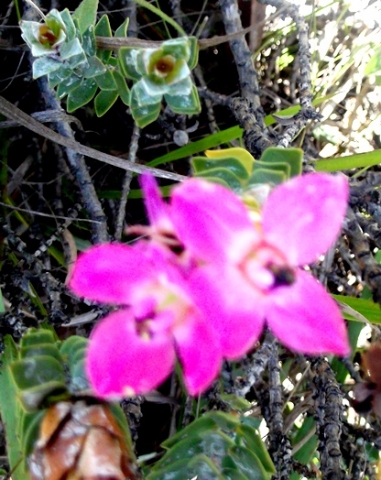 Sonderothamnus petraeus, commonly known as rockstar, is a sparsely branched, resprouting shrublet reaching 35 cm in height from its woody rootstock. The ovate, pointed leaves overlap up the stems in a regular pattern. The leaves have minute marginal teeth or a fine fringe, particularly the upper ones.

The species distribution is from Hangklip to Kleinmond. The habitat is sandstone crevices and cliffs among fynbos. The specific name, petraeus, is probably derived from the habit of living in rock. Although range-restricted and rare, the plant is not considered to be threatened in its habitat early in the twenty first century.

The two species of this genus are both found in Western Cape fynbos (Manning, 2007; Bond and Goldblatt, 1984; www.redlist.sanbi.org).