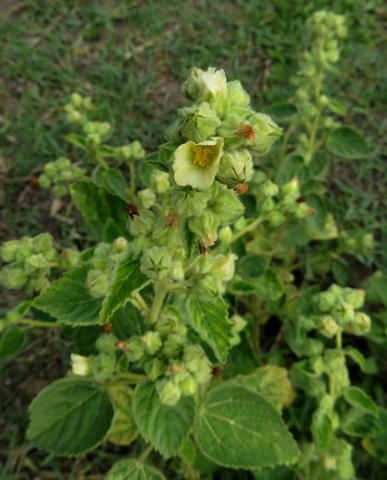 The flowers of Sida cordifolia subsp. cordifolia grow in dense, many-flowered clusters at branch tips and leaf axils. The flower has a bell-shaped, green calyx with lobes tapering to acutely pointed tips.

The petals are round-tipped, coloured white or one of several shades of yellow. They spread to form a wide, shallow cup. Petals of Sida species are usually not much longer than their sepals.

The short staminal tube in the flower centre divides at its tip into numerous free filaments forming a fluffy cluster. The small, kidney-shaped anthers may turn brown as they age. Each of the carpels where the seeds will grow has its own style branch.

Sida flowers open in the morning, unlike those of Abutilon, a similar genus in the Malvaceae family that open in the afternoon or evening. The plant flowers all year round, more vigorously in summer and autumn. The photo was taken in April at Mjejane (Pooley, 1998; Van Wyk and Malan, 1997; Onderstall, 1996; Leistner, (Ed.), 2000; iNaturalist).