Home » TYPES » Shrubs » Seriphium plumosum
Back to Category Overview
Total images in all categories: 11,506
Total number of hits on all images: 6,503,086 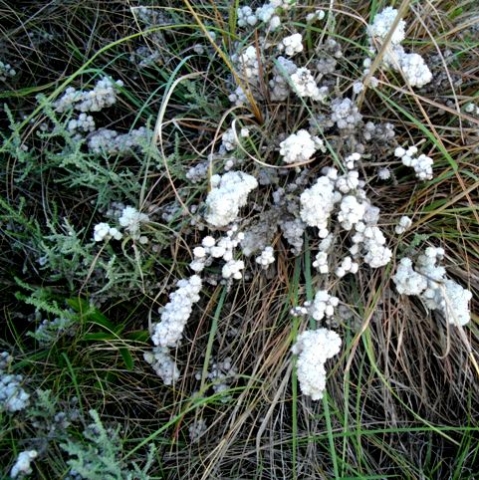 Seriphium plumosum had its name changed from Stoebe vulgaris for taxonomical reasons, not to escape its notoriety in agriculture as an invader. It may be moving back to the Stoebe genus, this time as S. plumosa but that seems half confirmed in the literature.

The small multi-stemmed shrub with its woody base has strong defences against moisture loss in hot dry climates. These include small ericoid leaves with woolly upper surfaces, pale grey colouring reflecting sunlight and a large, strong root system. The flowerheads comprising just one disc floret each surrounded by brown involucral bracts are arranged in long erect panicles. The white globose woolly galls in evidence here are not flowers.

Found almost throughout South Africa except in parts of the Northern Cape, encroachment by this indigenous plant into grazing veld and planted pastures is problematic. In the light of this it is easy to see why the species is not considered to be threatened in its habitat early in the twenty first century.

The plant contains a volatile oily substance that makes it aromatic but unpalatable to livestock and game. Usurping grazing space without yielding fodder, earned the plant the name of bankrupt bush among the farmers. Some call it slangbos (snake bush), so it may have at least some friends. Proliferation of this indigenous plant into a troublesome weed has been caused by poor veld management practices that can be countered (Van Wyk and Malan, 1997; www.grassland.org.za; http://redlist.sanbi.org).