Home » TYPES » Shrubs » Senna italica subsp. arachoides
Back to Category Overview
Total images in all categories: 11,506
Total number of hits on all images: 6,488,535 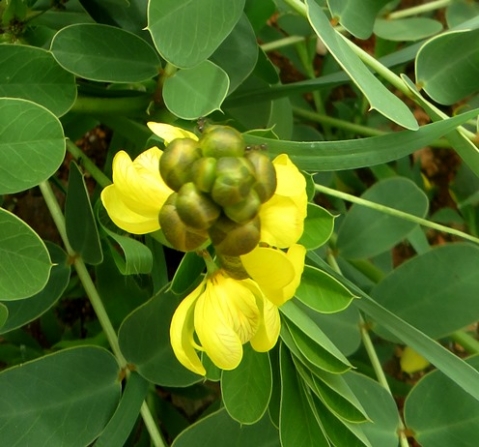 Senna italica subsp. arachoides, the wild senna or in Afrikaans elandsertjie (eland pea) and previously Cassia italica, is borderline shrub or herb, reaching heights around 60 m. It grows some trailing to ascending stems from a perennial taproot.

The young stems may be sticky from glandular hairs. Hair-tips (mucros) of leaflets are notable here, as are the unequal shapes and uneven colours of petals, as well as of the sepals where these still encapsulate the petals in their olive-green buds.

The South African distribution of the species covers all provinces except the Western and Eastern Cape. Further in Africa and western Asia these plants are widely distributed, at least to India.

The plants occur in varying vegetation and rainfall levels, usually coping with some drought and heat. Locally, the plants mainly occur in bushveld, woodland and grassland where soils are sandy or gravelly. The species is not considered to be threatened in its habitat early in the twenty first century.