Home » TYPES » Shrubs » Sclerochiton odoratissimus
Back to Category Overview
Total images in all categories: 11,506
Total number of hits on all images: 6,503,122 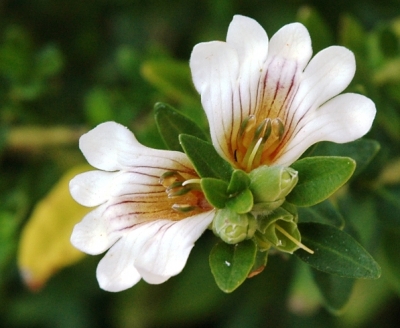 Sclerochiton odoratissimus, commonly known as white-lips, is an erect shrub reaching heights up to 2 m. Young stems are hairy.

The simple leaves are glossy, dark green and finely hairy. They are elliptic with rounded tips. The one-lipped corolla is five-lobed and white streaked with red near the base.

The species distribution is in KwaZulu-Natal and the Eastern Cape.

The habitat is open forest semishade, often on streambanks and forest margins at elevations from 750 m to 1500 m. The plant is not considered to be threatened in its habitat early in the twenty first century (Pooley, 1998; http://redlist.sanbi.org).