Home » TYPES » Shrubs » Schistostephium umbellatum
Back to Category Overview
Total images in all categories: 11,894
Total number of hits on all images: 7,134,964 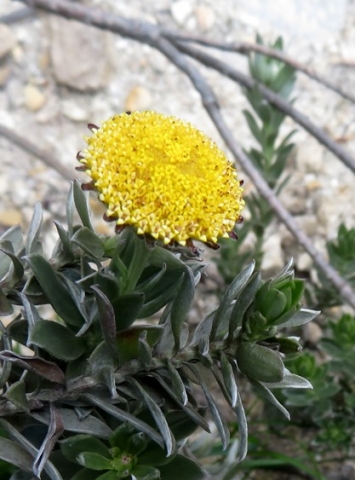 The generic name, Schistostephium, is derived from the Greek words schistos meaning cloven and stephanos meaning crown, referring to the outer ring of florets in the head that are deeply toothed.

The species distribution is in the Western Cape and the Eastern Cape from Montagu to Humansdorp along the coast as well as inland, north of the southerly mountain ranges in the Little Karoo and the Langkloof. The photo was taken at Spookberg in the Langkloof.

The habitat is forest margins and fynbos from sea level to middle sandstone slopes in dry to wetland conditions. The species is not considered to be threatened in its habitat early in the twenty first century.

Six to nine species of Schistostephium occur in southern Africa, a few more in tropical Africa. These plants belong to the Anthemideae tribe of the Asteraceae family, the chamomiles and yarrows (Bond and Goldblatt, 1984; Leistner, (Ed.), 2000; iNaturalist; http://redlist.sanbi.org).